INNOVATION FOR THE NATION

WASHINGTON — Just a few hours after the United States Senate ratified a critical environmental treaty with the potential to slow global warming and accelerate manufacturing in the U.S., two Delaware leaders of that effort — Senators Tom Carper and Chris Coons — met with researchers and alumni of the University of Delaware to celebrate the science that makes such progress possible and the Delaware connections that helped make it happen.

The event — UD Day in DC — is designed to demonstrate the impact of federally funded research and is a valuable resource for legislative aides and officers of federal agencies.

“We started this biennial showcase in 2011 because research really is the lifeblood of universities, including the University of Delaware,” said Kelvin Lee, interim vice president for research, scholarship and innovation, in his opening remarks. “It’s vital to our health, it’s vital to our economic wellbeing and it’s vital to society. And the University represents more than $5 billion of economic activity each year throughout the Northeast Corridor.”

The gathering was held in the Hart Senate Office Building, just a few blocks from the Capitol, where Carper and Coons had just cast their votes to ratify the 2016 international treaty — known as the Kigali amendment — that would phase out the use of hydrofluorocarbons (HFCs), chemical compounds used in air conditioning and refrigeration that have been identified as powerful accelerants of global warming. 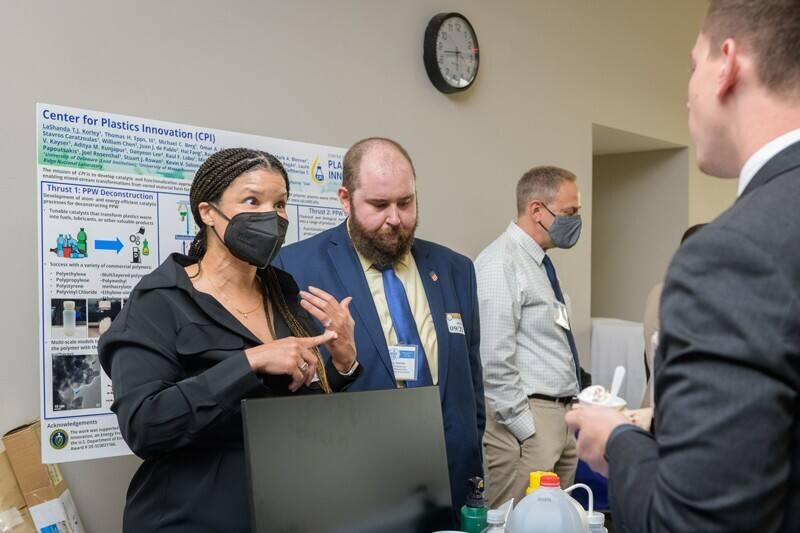 LaShanda Korley, director of the Center for Plastics Innovation, talks about the challenges and benefits of keeping plastics out of landfills and finding valuable new uses for them.

Among the dozens of other displays were the extensive research underway at the Center for Plastics Innovation, where researchers are pursuing ways to extend the lifecycle of plastics and produce new and valuable products from what now is plastic waste.

Plastics are complicated by the way products use mixed materials, materials that can’t be reused, materials that are perceived as trash after one use and sent to landfills instead of being recycled.

If the value of the elements used in plastic production is better understood, what now looks only like a huge problem can be an opportunity for innovative new products and solutions. There is reason for such hope, said Distinguished Professor LaShanda Korley, director of CPI.

“The problem is complex,” Korley said. “There are global issues, equity issues, lifestyle issues…. But you can’t just get rid of plastics. They’re useful. And if you consider the feedstocks [materials used in manufacturing], they are valuable.”

It makes much more sense to reclaim that value and reinvest it in new products than to dump it into landfills or into the ocean, where its value becomes a serious environmental liability.